Where Did My Valentine Go?

In September 1717, along with 362 others from the Palatinate in Germany, Valentine Clemmer arrived in Philadelphia. They came in three ships. Valentine brought his son Henrich with him along with a grandson Valentine Hunsicker. I am a descendant of Valentine and his son Henrich. There is a Clemmer book about Henrich and his increase, so we know lots about what happened after they arrived in the USA, but where did they come from in Europe? We only know part of the story.

This part we know. Valentine was born in Affoltern am Albis in Switzerland on May 12, 1655. He married Barbara Bär from nearby Ottenbach, both in the Swiss Canton of Zürich.  Barbara was born on September 11, 1659, and they were married on February 26, 1677.

From 1678 to 1717, when he emigrated to the USA, there are no more records of Valentine in Switzerland. It is presumed that he, like many other Anabaptists, moved to the Palatinate in Germany, but we can find no trace of his presence there. Where did my Valentine go? 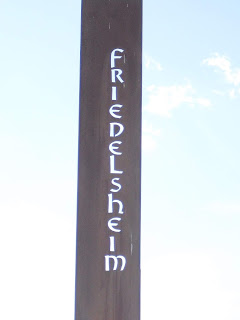 Valentine’s brother, Hans Jakob Klemmer, moved to Friedelsheim just west of Mannheim across the Rhine River in the German Palatinate. We have a reference to his daughter, Catherine Klemmer Hunsiker, being born on October 8, 1678 in the same Palatinate town of Friedelsheim. She and her husband, Samuel Hunsiker, are reported to have died sometime before 1717 in Friedelsheim.

With this evidence, it would seem that Valentine would have gone to Friedelsheim where he already had a brother and a daughter living. However, in searching available documents and speaking with historians from both secular and Mennonite archives, no trace of him can be found in Germany, let alone in Friedelsheim. Where did my Valentine go?

We know that he lived in Germany, and that he was even a minister there. We know many of his friends who sailed with him to the USA. We even know where most of them lived in Germany. But we can’t find a trace of Valentine. How do we know that Valentine lived in Germany? In a letter to the Dutch Mennonites responding to their inquiry about the health of the Mennonite immigrant community in Pennsylvania, a group of Mennonite leaders state that their spirits were bolstered by the recent arrival of several ministers from Germany. Among those mentioned was Valentine Klemmer. So, he must have settled somewhere in Germany. But where did my Valentine go?

Wherever he moved to in Germany, he must have buried his wife Barbara, because he came to Pennsylvania as a widower. We assume that he didn’t leave any discernable records in Germany because he was an Anabaptist; they didn’t baptize their infants, and records of births and deaths were kept by the state churches, in the case of Friedelsheim, the Reformed Church. Yet we have lots of references to other Mennonite/Anabaptists from that time and that region. Where did my Valentine go?

The Henrich Klemmer whom the genealogy book is about, would have been born in Germany. He was born in 1700, well after 1678, the date of Valentine’s supposed emigration from Switzerland. But there is no record of his birth there either. Where did my Valentine go?

With the sketchy information I had, I traveled to the Palatinate in September 2018. I visited Friedelsheim for the third time. The first time I visited, I had two siblings with me, and we mistakenly thought that our Henrich ancestor was Johann Heinrich, whose birth was registered with the Reformed Church, because he and his father, Hans Jakob, were reformed. As it turns out, this Heinrich, who emigrated to the USA in 1730 on the ship Alexander and Ann, is my Henrich’s first cousin. At least I know that I had relatives in Friedelsheim, if not my Valentine or Henrich. Where did my Valentine go?

During my second visit to Friedelsheim, we met with an historian who produced numerous Klemmer names from the village around the time of my ancestors. We also met with the pastor of the Mennonite Church in Friedelsheim which has records of Mennonite members from there and all the surrounding villages since 1665. I saw so many typical Euro-Mennonite names on the list that it made my head spin. Still no Valentine or Henrich. Where did my Valentine go?

On my recent trip, I stayed with a friend from Erpolzheim, a few miles from Friedelsheim, whose family had been Mennonite in the region since 1759. He introduced me to another historian from Friedelsheim who wrote a booklet on the emigres from Friedelsheim during the great wave of German emigres in the 18th Century. On the list was my ancestor’s nephew, Johan Heinrich, but no Valentine or his son Henrich. I left him with a list of questions about my ancestors, with dates and other information that I knew. Where did my Valentine go?

I also discovered a Mennonite Research Institute (Mennonitische Forschungsstelle) in Weierhof and gave them similar questions. Their first response was, even though Valentine was a pastor, that they had no information on a Mennonite Klemmer. I gave them further data and am awaiting their answer. Where did my Valentine go?

My quest for finding my ancestors has developed into somewhat of an obsession. I have become an expert on the Palatinate, both through reading about it and traveling through it. It is a beautiful area, with vineyards and vegetable farming everywhere. My host on this last trip is a retired vintner and apple farmer. I attended a “Wurstfest” in Bad Dürkheim near Friedelsheim which featured German sausages and wine. The villages are quaint, and homes are packed together on narrow streets, but the fields are flat and wide.

I spoke with the Sexton at the Reformed church in Friedelsheim, telling him about my relationship to his town. He said, “we have the best land, the best wine, and the most beautiful women. Why would anyone want to leave?” Then he lowered his head pensively and said, “Times were tough after numerous wars, our land passed between the French and the Germans, each new ruler either for or against religious reforms. There was lots of persecution.”

I suppose Valentine experienced similar oppression in both Switzerland and Germany. There must have been some pretty dire circumstances to make such an incredible journey with his children and a grandson when he was already 62 years old.

We know that he left Switzerland and eventually landed in Pennsylvania. But between the years 1678 and 1717, where did my Valentine go?

I hope to find out.

Posted by DonRClymer at 9:19 PM