The Collective Unconscious, Mandalas and DNA: Preparing Our Souls

I am extremely intrigued by Swiss psychiatrist Carl Jung’s theory on the collective unconscious. He believes that as human beings we inherit images, myths and symbols that are shared across time and cultures. These collective manifestations appear in our legends, dreams and art.

An example of a symbol that Jung found in most cultures around the world is the Mandela symbol. This symbol is a circular image which meant wholeness for Jung. “A  mandala is generally a circle with dividing lines separating it into several quadrants. Each quadrant represents a different theme and starts at the center of the circle working outward,” according to a site on mandalas. (source: http://www.meaningofmandalas.com/)

His initial discovery of this symbol came from India where they are quite prevalent. Here is an example: 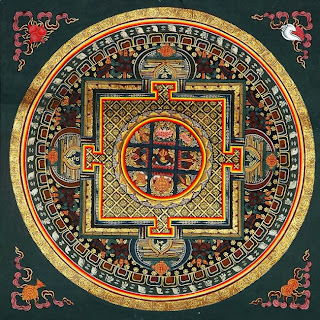 From Europe, we have appearing in many cathedrals what is called a “Rose Window.” These windows have the same circular shape and quadrants. 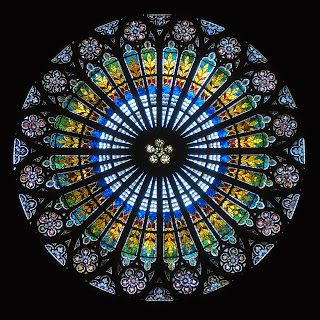 From Latin America, we have the Aztec calendar which also meets the definition of a mandala symbol.

From Africa comes this image, which is not exactly a circle, but it has the same quadrants, and a circle can certainly be imagined by rounding off the corners. 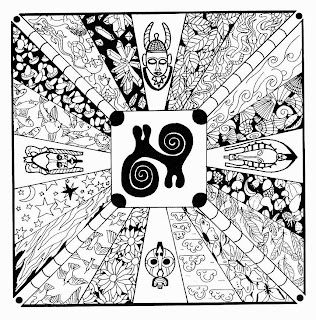 The Christian cross can also be imagined as a mandala symbol since it has four quadrants. The Celtic especially designed the cross with a circle in the center, making it more like a mandala symbol. The following image of a celtic cross shows that relationship. 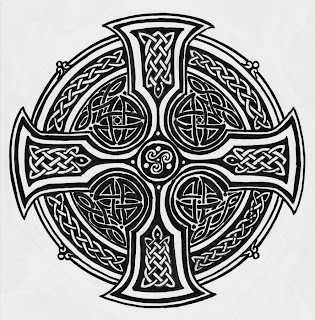 Now an interesting find. There are images of our DNA that look like mandala symbols. Here is an example of one from the website http://www.blazelabs.com/f-p-geom.asp.

Not only are these images in our collective unconscious, but also in our DNA. Apparently there are mandala-like patterns throughout the universe; from DNA to galaxies.

According to Jung, the mandala symbol comes from our collective unconscious.
I believe that the collective unconscious is the stamp that God has put on our soul. In Genesis 1:26-27, we read that we have been created in the  “image and likeness” of God. Within that image and likeness resides a holy longing for God. Symbols that well up from our unconscious (soul=psyche), like the mandala symbol, are reminders of our need for God. They are also reminders of what we as humans across cultures and times have in common.

Ultimately, I believe that good missionary work is to listen to the stories and the symbols of each people to whom we want to share the Good News. These stories and symbols, rather than being cast off as “pagan,” are the groundwork that God has laid in each of our souls to prepare us for the final revelation of Truth; God’s becoming flesh and dwelling among us.
Posted by DonRClymer at 9:35 PM