I have officially retired from teaching language. Beginning in 1976 with several interruptions, my career teaching language spans 40 years. There have been a lot of changes in my field in those years, especially when it comes to the technology available to deliver the product.

I began with what was called a language laboratory (lab). There were individual booths set up in a special room. A trained technician was needed to play the reel-to-reel tapes that were used at the time. The technician not only had to understand how to operate the equipment, but also had to have some knowledge of each language that was taught in order to cue up the tapes at proper time.

A special hour each week had to be scheduled for students to enter the lab for listening and speaking sessions. I typically had three classes, and sometimes a class had more students than the lab could accommodate, so there were years when I had as many as six different sessions with the lab; all of which had to be coordinated with the technician, usually a student, and the various levels of Spanish that were offered.

Language educators were really excited about this new technology. Where once language was an exercise in reading and writing, listening and speaking could now be added to the curriculum. Students could hear native speakers and reproduce the sounds as best they could; listening to their own efforts alongside the sounds of the native speaker.

As innovative as the language lab was, with the introduction of cassette tapes, they became obsolete.
Not only were they very expensive to install and maintain, their availability to students was limited. With cassettes, nearly everyone owned a tape player and could listen to tapes on their own in their dorm rooms. So at the beginning of each semester, we would hand out a set of some 20 cassette tapes to each student. They carried them back to their rooms in plastic grocery bags, to be returned at the end of the semester for recycling. For the order of each book, a language instructor was issued a set of master tapes to be reproduced. Instead of a language lab, a school now only needed a good tape duplicator and someone to run it.

As technology developed, the Walkman allowed students to listen to their tapes anywhere they wanted to. They were no longer confined to the limited schedule of the language lab. I even heard of students jogging while listening to their language tapes. There were a few issues with cassettes; tearing and jamming to name a few. Such issues were easily resolved simply by replacing the tape.

Not too many years transpired until the advent of the CD and the Discman player. These were even more portable than the cassettes, and soon the lab component of the text was delivered by CDs. With the order of a textbook, each student received their own set of CDs to do the lab part of the course. Interestingly, the paper workbooks that were used from language lab, to cassette, to CDs didn’t change much other than a few revisions to keep up with new vocabulary.

We have now entered the Internet age. Everything has gone on the web. No more cumbersome labs, bags full of cassettes, or stacks of CD cases. With the purchase of a textbook, students now receive a code with access to the textbook’s “supersite.” All a student needs is a laptop, a tablet or a smart phone and they have access to all their assignments. Not only can they do their listening and speaking assignments on the go, but their written assignments as well.

Throughout my career, people would ask me what program I would recommend for learning a language on my own. My stock answer is, “buy the cheapest one you can find.” Why do I say this? I have seen many well-intentioned people buy the latest and greatest language technology that promises amazing results in a very short amount of time for a very high price. Too often those expensive programs wind up in a closet or desk drawer with little results.  The adage “You can lead a horse to water, but you can’t make it drink,” applies here. All the bells and whistles of modern technology may get a learner to the language, but unless there is motivation and time, it can’t force a them to learn. A highly-motivated student who invests the proper amount of time will learn on the most basic and simplest of methods.

As I reflect on 40 years in the language classroom, I am grateful for the changes and innovations the new technology has brought to the instructor. In many ways these innovations have lessened the burden on us teachers. Grading online assignments with a computer is much easier than toting 40 half-inch workbooks home to grade. However, I cannot say that students are learning better with the new technology now at their disposal. In my experience, the student who is motivated and puts in the necessary time will learn, no matter how simple or attractive the technology.

Technically speaking, motivation is the key.

Every night before falling asleep, I plug in my smart phone to let it charge. It usually takes about an hour and a half to recharge, depending on how low the battery is. This morning when I awoke, I noticed that for some reason, even though I had plugged my phone in when I went to bed, it hadn’t charged. The battery was under 20% and going on low power mode. I sorta panicked. When would I have time to charge it? I needed its services and it was running low!

Those of you who frequent airports have probably noticed the proliferation of poles in waiting areas. These are a recent phenomenon. They are for recharging the batteries of all the electronic equipment we carry with us wherever we go. There are often lines of people waiting to recharge their indispensable gear. Most of the rest of the people in the waiting areas are staring at their hands or their laps, using what seems to be so necessary.

Few of us can function without these apparatuses that need a constant recharge. We carefully monitor their use and the percentage of charge left. We are quick to recharge so that we don’t lose all the valuable data we have so carefully saved.

When it comes to our own lives, are we as careful about a getting a recharge? Do we carefully monitor how low our batteries are getting? Do we put in the necessary time to recharge? Do we find places to recharge along the way like in airports, cars or the office?

A favorite story that I have recounted endless times, takes place in Paraguay during a church conference. An indigenous man who lived in a very remote village about four hours away from the capital Asunción, took a bus ride to attend the conference. After arriving in Asunción, he was observed sitting in a corner by himself. After about an hour, some concerned friends approached him and asked him if there was anything wrong? “No,” he replied, “the bus ride from the Chaco was so fast and furious, that I am waiting for my soul to catch up with the rest of me.”

How often we live our lives “fast and furious” on a bus careening out of control. How seldom we sit for an hour to let our souls catch up with the rest of us; to recharge our batteries. Most of us are running on empty and wonder why we are frazzled, stressed, and burned out.

The Israelites experienced a “fast and furious” time when they were fleeing Pharaoh’s army after their escape from the bondage of Egypt (recounted in Exodus 14). They were in “great fear” and cried out for their deliverance. Moses tells them: “stand still,” and later on “keep still.” One could easily say that they were frazzled, stressed and burned out. Yet to be delivered from their situation, they needed to be still; to let their souls catch up with the rest of them.

Instead of being pursued by Pharaoh’s army, we are pursued by the demons of self-image, self-worth and productivity. We think that getting on a faster bus that takes advantage of every second of our day, will help us get what we think we need. We think that taking time for silence, Bible study or prayer will keep us from getting done all that we think is so important. We have become human doings rather than human beings. Our batteries are in low-power mode and we have no time to recharge them.

Be still. Stand still. Recharge your batteries. Let your soul catch up with the rest of you.
Posted by DonRClymer at 11:47 AM No comments:

I have been going through my files while cleaning out my office. I found this letter that I wrote to faculty colleagues at Hesston College who were celebrating a recent pay raise. My thoughts were shaped by a recent return from a Mennonite Central Committee assignment in rural Mexico. I don’t recall anyone agreeing with my thoughts. Our culture is blind and deaf to this perspective. What do you think?

Before we project our family budgets over the next three years based on what we will be earning, permit me to share some thoughts.


Can we afford the extra “spiritual” burden receiving this extra money places on us? Are we “spiritually” capable of being better stewards of God’s money? 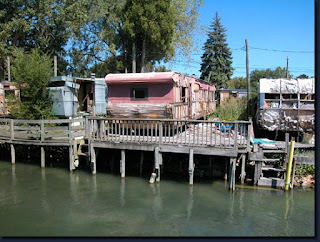 Should we compare our salaries with other similar institutions or with the workers who live in the trailer park just a few blocks away?

I, too, feel a budget crunch at home. But I have no notion of hunger, of nakedness or of homelessness. I pray that we can examine the reasons we so eagerly accept more of what loving so dearly is the “root of all evil” (I Tim. 6:10 and Heb. 13:5)