Shadenfreude and Mudita: Reflections on Envy

I had a friend in college who was the ultimate procrastinator. He never seemed to have time to work on his assignments until the very last minute. We were in a class together that required a fairly major paper. I began weeks before the due date, gathering information to include in my thesis. I kept bugging him about his progress, and he always responded that he hadn’t yet begun.

The night before the paper was due, my friend stayed up the whole night to write his paper. I had finished my work in good time and was well rested when we appeared in class together the next day. He was bleary eyed, but ready to turn in his now completed work.

I was sure that I would get a better grade on my paper since I spent several weeks on it and didn’t slap it together the night before. To my surprise and great chagrin, he received a better grade than I.

I wanted so badly to rejoice in his lower grade because I thought that was what he earned. Rejoicing in the misfortune of others is schadenfreude. This German word describes the most normal reaction that we humans have when someone falters. “They got what they deserved,” we are quick to point out.

What if I had rejoiced with my friend on his good fortune instead? What if I had invited him out to celebrate his good grade? Doing this would be a concept called “mudita” in Buddhist tradition. I read about this idea in Douglas Abrams’ book The Book of Joy. The book records reflections between the Dalai Lama and Desmond Tutu on the subject. The discussion is how to mitigate envy that keeps us from experiencing joy. Instead of being envious of the neighbor who just purchased a BMW, we should rejoice with them in their good fortune.

In the familiar story of the Prodigal Son (Luke 15:11-31), the older son wallows in self-pity when his father shows unmerited favor on his wayward son’s behalf. The older son was hoping his younger brother would get what he deserved and work as a servant for his father. He wanted to rejoice in his brother’s punishment. That is schadenfreude.

Instead, the father showed mercy on his rebellious son. He gave him what he needed rather than what he deserved. The banquet he gave for him showed that he was rejoicing that his lost son was found. If the older brother had been able to celebrate his brother’s good fortune, he would have shown the concept of mudita. But like so many of us, he couldn’t. We are overcome with envy.

Imagine how much easier life for us would be if we could celebrate the achievements of others rather than be envious of them. As a spiritual practice, we should make a list of all the times we were jealous of someone else’s achievements or acquisitions in the past few months, then redirect our energy to congratulations rather than envy. We would probably see the other person in a totally different light and help ourselves be much more contented with who we are and what we have. There is a reason that one of the ten commandments is about coveting. Exodus 20:17: “You shall not covet your neighbor’s house. You shall not covet your neighbor’s wife, or his male or female servant, his ox or donkey, or anything that belongs to your neighbor.” That’s a pretty long list. If we could celebrate our neighbor’s house, his marriage, his mode of transportation or other possessions, according to Desmond Tutu and the Dalai Lama, we would be much happier.

Schadenfreude, rejoicing in your friend’s or neighbor’s misfortune, or mudita, rejoicing with them in their good fortune. Which will it be?


Posted by DonRClymer at 2:26 PM No comments:

On Fridays Esther and I take care of our two sweet granddaughters. One is two years old and the other is one and a half. In spite of the fact that they are a joy to be with, after 9 grueling hours of watching them and trying to keep up with them, we are usually exhausted.

This past Friday, I deliberately repeated the word “hygge” (pronounced hue-guh) whenever I felt overwhelmed. It was a bit like using a key word to help return to the important center during Centering Prayer.

I first heard of the Danish concept of hygge from a book called Four Gifts by April Yamasaki that I am reviewing. According to Alex Beauchamp on her website “Hygge House,” hygge is “a conscious appreciation, a certain slowness, and the ability to not just be present – but recognize and enjoy the present.” 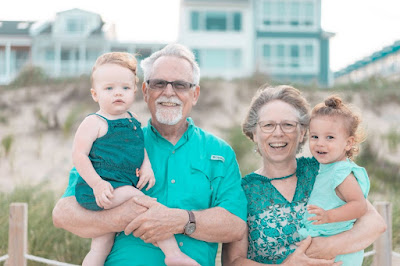 With my granddaughters, I wanted to slow down and enjoy the present. I wanted to savor the precious moments as much as I could, and not be overwhelmed by their energy. After all, I will not be with them forever.

Apparently, this concept was developed by the Danes in order to be able to survive the boredom of the long winters nights in Denmark. Beyond the sense of presence, according to Beauchamp, adjectives that describe the concept are “coziness, charm, happiness, contentedness, security, familiarity, comfort, reassurance, kinship, and simplicity.”

That list of adjectives reads like the anthesis of US American obsessive, burned-out, stressed-out and cut-off culture. While we idealize and seek to embody those concepts, little in our lifestyles allows us the freedom to reach them.

In her book, Yamasaki elaborates a little more on the concept: “Hygge means community with enough for all, casual simplicity, comfort food with friends, a mug of hot chocolate by the fireplace, warm socks, and much more.” Perhaps our culture indulges in comfort food with friends, hot chocolate by the fireplace and warm socks, but unless I am mistaken with my observations, we really fall short on community with enough for all and casual simplicity.

The discussion on hygge comes in Yamasaki’s chapter on “soul care,” or what she calls “self-care.” Her book broaches self-care on four levels as in Jesus’ great commandment: “Mind, heart, soul and strength.”

I hope that Esther and I are creating a sense of security, contentedness, familiarity, and kingship with our granddaughters. I hope that they will always carry with them memories of coziness and comfort at their “Grosi” and “Bubu’s” house. I hope we can cultivate these feelings whether it’s in the heat of summer or the dead of winter. Above all, I hope we can create these perceptions in their hearts in spite of how tired we might be.

Hygge is probably easier for retired grandparents to cultivate for their grandchildren than for parents who are in the midst of building a career, establishing a home and defining who they are as persons within their society. Esther and I tried our best to develop most of those concepts with our home and family, but perhaps failed at too many of them because of our moving around, changing jobs and too often living too far from extended family.

US American society could use a good dose of hygge We take too few vacations that aren’t working vacations and have too few pauses in our weeks to kick back and and smell the coffee in spite of all sorts of advice to the contrary. We are probably the most overworked and stressed-out people on earth, and technology has made it even worse. Although created to make our lives easier and to save time, the fact is, technology has allowed us to accomplish much more than ever thought possible, demanding more and more of our time. I experienced this increased demand on my time exponentially during my career as a teacher.

In the book my sister and I wrote The Spacious Heart we devote a whole chapter on what we loosely defined as “Holy Leisure.” As I read back over that chapter now, I think we were trying to develop the concept of hygge in our readers.

Relax, take it easy, stop and smell the roses or the coffee, make your life and home a charming, cozy, contented place of comfort.

Hygge, the delight the Danes gave us. It is indeed care for the soul.


Posted by DonRClymer at 4:45 PM No comments: