The Guatemalan family brought home a bag of groceries. The whole family gathered around the kitchen table to watch. Each time the father took out an item, the whole family cheered. Flour, check. Sugar, check. Cans of tomato paste, check, and so forth. 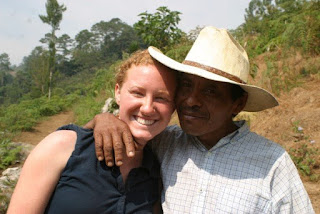 An Eastern Mennonite University (EMU) student, living with this family while studying on a cross-cultural program, came out of her room to see what was going on. She watched the proceedings with astonishment. “Why do you cheer about every item in the grocery bag?” she asked. “These are very ordinary things!” She thought something spectacular had been purchased.

“We are cheering because this time we were able to get everything on the list,” answered her host sister. The student rushed back to her room to hide the tears that were flowing from her eyes.

“How can I ever take anything for granted again?” she wrote in her journal. She recalled a time when she was angry at her mother for bringing home the wrong flavor of Dorito Tortilla Chips. “We are so spoiled. We have no idea how most of the world lives.”

Stories like this fill the journals of students who have traveled to nations all over the world in EMU’s cross-cultural programs. These experiences transform them in ways that classroom lectures and readings seldom do.

I will be retiring after the end of this academic year. As I look back over my thirty-year career, leading groups of students to Spanish-speaking countries for a cross-cultural experience stands out as the highlights of my career. Below I list the groups that I was involved with, the year and the country. The ones with an asterisk are semester-long programs. The rest were four-week programs except the last one which was a combination of a 3-week and a 6-week program.

There are a variety of reasons why these have been the highlights of my career. Indeed, seeing the transformation that takes place is extremely gratifying. To know that you have been a part of this transformation is also gratifying. However, I think that what I have discovered to be most important are the deep, enduring relationships that I have developed with students. Being with them 24/7 is a lot of time invested, especially on a semester-long seminar. Students see your very best and your very worst. Of course, I see that in them as well. You cannot hide behind degrees or a spectacular resume during that amount of real-life exposure.

I have come to see that education that transforms is based on mutual vulnerability. Cross-cultural education provides the best laboratory for this to happen. I became very angry with my group one year in Guatemala and lashed out at them. Here is what happened.

We all ate in common cafeteria with the staff of SEMILLA where we were studying Spanish. On one particular day, the meat was fairly tough according to US American standards. I watched as student after student scraped their serving of meat into the trash bin. The incident tugged at me and I became more frustrated as the day went on. I wanted to use this as an object lesson on entitlement and privilege. I couldn’t sleep very well that night as I pondered on how best to approach them about this occurrence.

Two things bothered me about the incident. The kitchen staff and other non-salaried employees, many working diligently to eke out a living, would wait until all the students and the salaried staff were finished eating. They were allowed to eat the leftovers for free. For many of them it was the biggest meal of their day. I could only imagine their thoughts as they saw our students throwing away what they probably thought to be perfectly good food. The other thing bothering me was that we had just visited the city dump several days before. My students were absolutely appalled that a whole class of people scavenged through the garbage to find whatever they could to eat and other reusable and/or resalable items. I wanted them to see the relationship between their cavalier attitude toward food and how the much of the world had to forage for even a few morsels to eat.

I don’t remember much about how I approached the students about the incident. What I do remember, is that in sharing the stories about hungry people whom I had met through the years, and the two things I mentioned above relevant to their own situation, I broke down with emotion. Soon most of the group was in tears. Some were tears of sympathy and some were tears of shame. 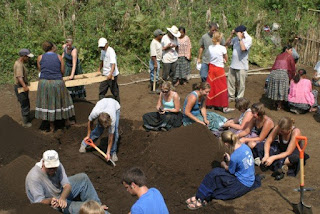 I don’t know if my students will remember the incident. One thing that they will always remember, however, was my vulnerability in front of them. In a journal collection that the group gave me at the end of the trip, along with thanking me for leading the semester program, student after student wrote, “thank you for being real with us,” or “thank you for your vulnerability.” I sincerely believe that they responded better to my teaching and to me as a person because of this.

In the process, not only were they transformed, but so was I.

Posted by DonRClymer at 10:24 AM No comments: