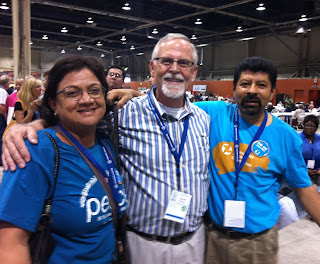 Mennonite World Conference in Harrisburg, Pa., is history. I only had the privilege of attending for one day, but through that minimal exposure and speaking with friends from around the world who attended for the full week, I found many reasons to celebrate.

1.     Thousands of “cradle” Mennonites do not have Swiss/German/Dutch surnames. Second and third generations of Mennonites and other Anabaptist groups are from Latin America, Asia, and Africa, and bring new meaning and vitality to what being an “ethnic” Mennonite is.
2.     The epicenter of the Mennonite world is moving farther and farther to the south. 66% of those claiming Anabaptist connections are from the global south. Nearly 40% from Africa, 20% from Asia and 16% from Latin America. This might be disconcerting for those of us with European roots, but it makes our World Conference a rainbow of diversity and a piece of heaven on earth.
3.     There are thousands of people joining the Anabaptist fold here in North America who are not “cradle/ethnic” Mennonites. While our own children are abandoning the faith of their fathers/mothers in droves, a new stream of Neo-Anabaptists are discovering the genius of an alternative to the extremes of both ends of the Christian spectrum in US America. Christendom is falling apart, and Anabaptism has been articulating an alternative to Christendom for 500 years.
4.     New theologies based on Anabaptist thought are emerging from the margins to minister to people in their places of oppression/need. In Guatemala, SEMILLA, an Anabaptist seminary, is training pastors and lay people throughout Central America on how the church can be a witness and an answer in an extremely violent context. Out of Philadelphia, Drew Hart is espousing a Christ-centered response to structural racism with a theology/discipleship he calls Anablacktivism. I am sure there are many more in other contexts.

All of these elements were evident at World Conference, and I celebrate them. Jesus’ Kingdom in its Anabaptist/Mennonite expression is alive and well and growing. Let’s not grovel in the negativity of the splintering of factions in our own context (USA), but celebrate God’s liberating, redeeming work around the world.
Posted by DonRClymer at 10:32 AM 2 comments:

I will begin by admitting that I couldn’t be more in the center of power when it comes to the make up of delegates who attended the convention. I am a middle-aged (okay, some would say old) white male from ethnic roots that extend back over 300 years in the USA alone. Some people quake when I say I am a professor and others squirm when the discover that I am a published author. I am not marginalized by any stretch of the imagination, unless my two artificial knees qualify for some sort of handicap.

So I just got home from my first-ever national convention of the Mennonite Church. The experience was pretty awesome. That four thousand people, only 800 of whom were voting delegates, thought it worth spending beaucoup bucks (okay, maybe here I would have a critique) speaks volumes.

The first night I attended the combined worship service. Now I confess that the attempt to be relevant to people jaded by the bells and whistles of popular culture was a little over the top. I wouldn’t have needed the hype, the volume, the multi-colored floodlights and the smoke, but there were many worshipful moments and great teaching. In fact, the teaching at each worship session I attended was first rate. I was especially challenged by Dale Schrag’s message about certitude.

Let me mention walking in the halls between all the sessions. I met friends from all across the nation, many of whom I hadn’t seen in years—from places I’d lived and from former students. And they weren’t all pale faces, either. Hugs, smiles and pictures from Latino and African-American friends livened up my encounters. True, there weren’t enough of them in the halls and at the tables, but I can only imagine there were more than 20 years ago, and the number continues to grow.

Not only did I get to meet old friends, I met many new ones. I had some significant conversations with numerous people during meals or over coffee. We didn’t solve the world’s problems, but we came close.

Then we get to those delegate (delicate?) sessions. Over 800 of us crammed in the hall. I was at table number four. Apparently there were some substantial issues at stake for us to discuss, so I viewed those around the table with quite a bit of skepticism. I only knew one of them. Our table leader, Earl Kellog, a member of the Executive Board, was such a sweet, non-threatening presence, that we were put at ease before we started.

As we progressed through the agenda of the week, it became obvious that we differed substantially on nearly all the issues. But we discussed everything civilly, learned to trust each other, and to deeply respect each other’s point of view. Could I even say we “loved” each other? It sure differed from the way people tend to express their views on social media.

Being a delegate, I couldn’t attend all the seminars that were available (although I did play hooky from one delegate session in order to present a seminar of my own). Wow! What a plethora of offerings! When we had free time I was able to attend a very useful and provocative panel discussion on the post-Ferguson effects on the Mennonite church.

It was impossible to attend everything. There were special services for particular issues, times to meet in prayer and contemplation for the soul and times to exercise for the body. Kudos to the planners for all the work that went into this event.

I realize that there was pain and exclusion at the conference. I realize that not everyone has the same perspective as I. However, I have become rather weary of all the negative stuff posted on social media about the conference, and the echoes from their friends who hadn’t even attended. It was not perfect, but there were a lot of things to celebrate at this gathering of God’s people at this particular time in our history.
Posted by DonRClymer at 11:00 AM 2 comments: