I have lived a privileged life. I have been able to work and study in places around the world, and have learned to communicate in various languages in the process.

In Latin America, I have lived for extended periods of time (for at least a year) in Honduras, Guatemala and Mexico. In addition, I have visited all but three Spanish-speaking countries as well as Brazil. I calculate that in all I have spent the equivalent of seven years in the region.

In Europe, I have spent significant time in Switzerland, the homeland of my spouse, and recently returned from a year there. In all, with our summer visits included, I’ve spent nearly four years in Switzerland. I studied for four months in Germany, and visited eight other European countries.

There are many things that I have learned from these diverse places and have incorporated significant lessons from each of them into my world view. I have also developed significant relationships with beautiful people from these places. In addition, people from all around the world have been in my classes; from Iraq and Kurdistan, from Paraguay to Puerto Rico; from Japan and China to India and many parts of the former Soviet Union. I keep in contact with them years after they were my students. Their understanding of the world expands my own.

Because of these varied experiences, I have often asked myself the question, “Where is home?” This difficult for me to answer, because even having been born in the USA, I often don’t feel at home here. Nor do I feel at home in any of the other places I’ve lived. I feel like a “stranger[ ] and alien[ ] on the earth” (Heb. 11:13) with no “permanent home.”

After we’ve returned to the USA from our various adventures overseas, many well-intentioned people ask us, “Aren’t you glad to be home?” assuming that things are much better in the USA than anywhere else in the world. First of all, the USA is not my wife Esther’s home. She was born in Switzerland, and all of her family still live there. Second of all, I have discovered that things aren’t always better in the USA. In fact, there are many things that are worse. But I can say this only because I have experienced other ways of doing and being.

So where IS home? The scripture I quoted above from Hebrews, says that we have no permanent home. Other versions say: “no continuing/ enduring/ lasting city.” I like the German “Hoffnung für Alle” version the best. (Loosely translated by me) “For on this earth there is no city where we can always feel at home.” This has been my experience.

300 years ago, my ancestors were pushed out of their homeland in Switzerland. The Bernese government was so eager to get rid of them, they paid their passage on a river boat down the Rhine to Holland. Some tried to resettle in Germany, but were still considered second class citizens with lots of push-back from the locals, both neighbors and government officials. Many eventually emigrated to the USA when they learned of the invitation of William Penn and received aid from Dutch Mennonites for the passage across the ocean.

When they arrived in the USA, they were almost immediately confronted with the American Revolution, along with skirmishes with local Native Americans. Some moved farther west or to Canada. They understood better than we do the concept of “no permanent home.” They were refugees, “strangers and aliens” for several generations. This lack of permanence made them more dependent on God.

I am seven generations removed from those refugees. Most of their descendants have chosen an “enduring city,” and have become settled and self-satisfied where they live. It is easy to fall into this trap. I am not immune to these tendencies.

1.     Move to another country and live for a year or more doing some sort of service with a mission agency or NGO.
2.     Get to know some refugees in your town, county or state. Listen to their stories, prepare them a meal, walk with them in their daily struggles.
3.     Get to know anyone who lives at the margins of your town. Every town has them, and if you don’t know who they are, you are living in a bubble.
4.     Volunteer at a food pantry, soup kitchen, or social service agency in your town.

As a wise former student wrote, “Home is anywhere our soul finds rest.”
Posted by DonRClymer at 10:10 AM No comments:

Psalm 121 is a Psalm of ascents, thought to be sung by Jewish pilgrims on their way up to Jerusalem for annual festivals. Jerusalem stands on a hill between the coastal plain and the Jordan River valley, so traveling from any direction toward Jerusalem required looking up to the hills.
Being a pilgrim has often been used as a metaphor for Christians passing through our earthly life. Hebrews calls us “strangers and pilgrims on the earth” (11:13), with no “lasting city” (13:14).
Our year in Switzerland was like a pilgrimage with no “lasting city.” The hills we saw daily, however, were a continuous reminder that God’s presence was constant and solidly reassuring, like Psalm 121.

I lift up my eyes to the hills—
where does my help come from?
On the way to many of our destinations in Switzerland, we would round a curve in the road, emerge from a dark fir-lined forest, and feast our eyes on the scene pictured below. These are the incredibly beautiful Bernese Alps seen in the distance. In fact, this scene was visible to my wife Esther every day on her commute to work. It never got old, even though she grew up in Switzerland. 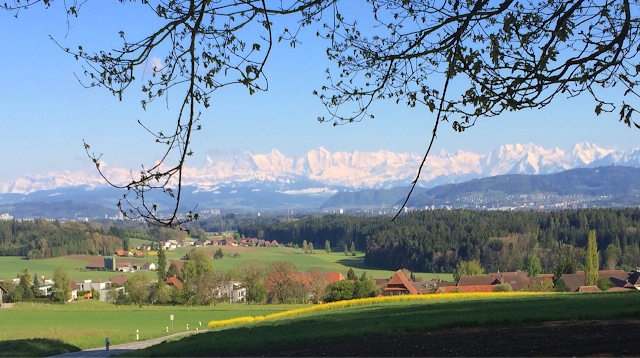 Indeed, seeing the mountains’ rock hard-sturdiness that withstood the ravages of the ages, gave Esther and me confidence to go through whatever we had to face on a daily basis. For us they definitely answered the question: “Where does my help come from?” 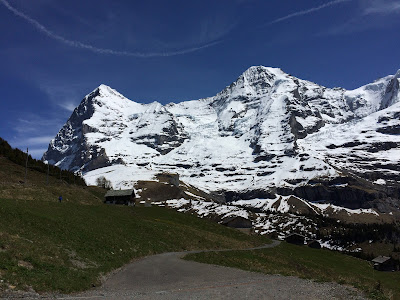 My help comes from the Lord,
the Maker of heaven and earth.
The Lord, who helps us, is also the Maker of heaven and earth. It is hard to find a place in Switzerland where God’s creation is not in full display. Some of the most magnificent displays of nature in the world are packed into a very small land area the size of the state of West Virginia. Through God’s magnificent creation, we were reminded of God’s glory and presence at every turn. 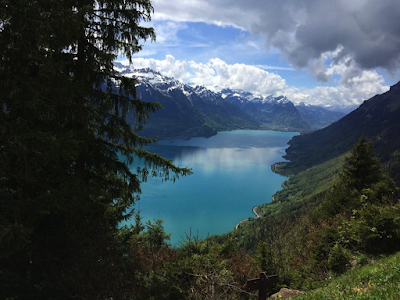 He will not let your foot slip—
he who watches over you will not slumber;
Switzerland is replete with hiking trails. Hiking is one of the most popular activities of the Swiss. Because of twists and turns, steep inclines and descents, is easy to slip while hiking the many trails through the mountains, even if they are well maintained.  Being assured of God’s presence while on such treks is essential. Unfortunately, too often there are reports of serious injuries and even deaths from hikers who have slipped. 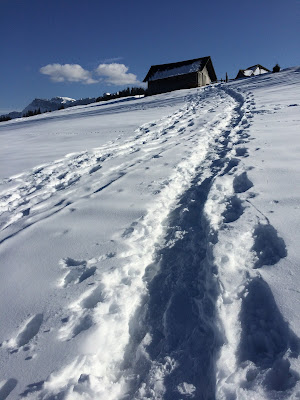 Indeed, he who watches over Israel
will neither slumber nor sleep.
Our pilgrimage to Switzerland did not include sleeping in the wild exposed to the whims of nature. Even so, we needed to feel assured of God’s abiding presence during our sleeping hours.

The Lord watches over you—
the Lord is your shade at your right hand;
The sun will not harm you by day,
nor the moon by night.
When hiking in the Alps the sun seemed to be fiercer than in the lowlands. Protection from the sun was quite important. Apparently the right hand needed more protection back then because it didn’t have a shield. God’s abiding presence protects us from the elements. 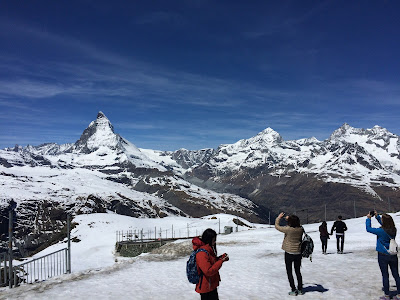 Not only will God protect you from the whims of nature, but throughout all your life. During our pilgrimage to Switzerland, the mountains that we repeatedly viewed, symbolized this protection for us. Their constant presence, their immutability, their beauty, continually reminded us of God’s enduring presence.
Our year is over, our pilgrimage to Switzerland complete. Fortunately we still retain our memories to remind us of God’s unfailing presence with us. 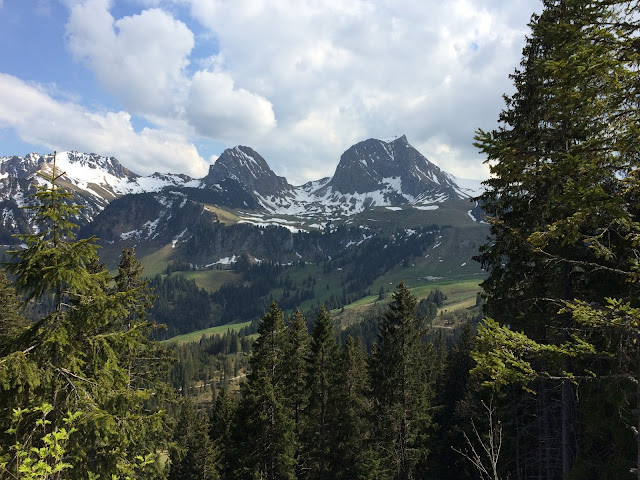 Posted by DonRClymer at 12:21 PM No comments: