Some pictures of my car buried in the snow.
At least three feet of snow fell (91 cm). 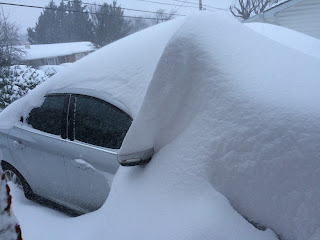 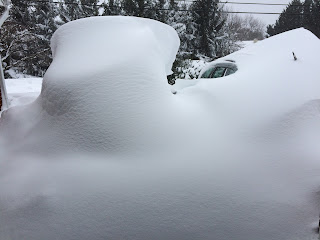 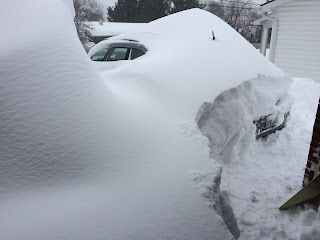 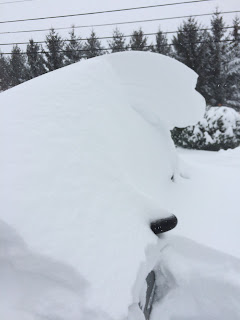 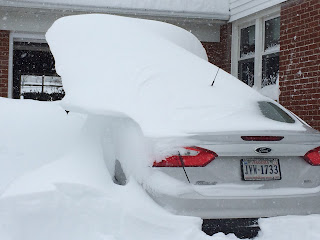 Posted by DonRClymer at 5:05 PM No comments:

In my book A Spacious Heart, I spend much of the first chapter explaining how I became a very angry and cynical adult after being the class clown in High School. I wrote similarly in the book  A Living Alternative, to which I contributed a chapter. In the original document of my book Meditations on the Beatitudes, a reviewer was turned off by how many times the word anger and angry appeared. I was challenged to find synonyms. Point is, I knew how much anger controlled my existence. And it wasn’t pretty.

In the same publications, I wrote how I was able to overcome the anger and cynicism through contemplative activities. Dreams, meditative walks, music, scripture, and centering prayer were a few of the means that I used to turn inward; to deal with the anger within myself instead of projecting it outward on to others. After years of my inner journey, I reported that a colleague remarked, “You’re always smiling!” The class clown had apparently returned. It was pretty. 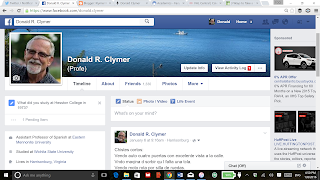 I joined Facebook during the year my son was in Germany, and my wife and I were leading a group of students to Guatemala and Mexico. It was a way to keep in touch with him beyond Skype and Email. We shared photos from our activities, not only with each other, but also with family and friends. Later, having become quite close to the students on our group, Facebook was a nice way to stay in touch with them after our trip was completed.

As the years have gone by, the lure of Facebook has become more and more powerful, cutting into the time that I had had for inner work. Slowly but surely the anger and the cynicism began to creep back in. The proverbial straw that broke the camel’s back was an article posted by a good friend about how angry US Americans are, especially whites and Republicans.

As I read the article and many of the comments that followed, I began to wonder what role social media in general and Facebook in particular played in producing all these angry people. As I started to examine my own use of Facebook, I counted how often I felt distressed, frustrated, or downright angry after a session. The results were not encouraging. I tried scrolling past the anger-producing posts to happy pictures and great quotes, but invariably I was drawn to click on articles and blog-posts that produced more anger than enlightenment. I wonder how true this is for others. Have you experienced anger while scrolling through your news-feed?

Facebook or not, ours is a very angry culture. I received the wrath of my father, and I’m sure he received it from his father. I thought that the “make love not war” generation would pass on a different quality to their children, but I have encountered many young adults consumed by anger. I do not think that Facebook helps to mitigate anger, but rather to fuel it.

I know what mitigates anger. I have experience. The contemplative practices I mention above, along with many others, helps us to stop, to look within, to listen to the still, small voice of God rather than the roar of our culture. As I begin the new year, I hope to spend less and less time on Facebook and more and more time contemplating the beauty of creation and God’s love for me and everything in all creation. Selah.
Posted by DonRClymer at 5:00 PM 3 comments: