“Dioscidencia:” A Romance, a Call, and an Improbable Mission 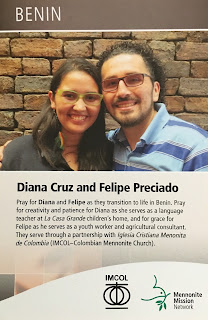 In Spanish, when things come together in unexplainable, remarkable ways, believers call it a “Dioscidencia” (Godcidencia) instead of a coincidence. A Dioscidencia demonstrates the miraculous movement of the Spirit not unlike what a young couple from Colombia experienced.

Diana Cruz met Felipe Preciado during the orientation of volunteers in Mennonite Central Committee’s (MCC) International Visitors Exchange Program (IVEP). They were both Mennonites from Colombia, South America, but from different regions. Their furtive glances at each other ended up in a romance that was sustained during their year in separate localities in the United States. After that year in the IVEP program, they returned to Colombia and got married.

I worked with Diana in the Spanish department at Eastern Mennonite University in Harrisonburg, VA. She was a Spanish language conversation assistant for our Spanish students. Felipe worked on a farm near Kidron, Ohio. During the course of their year in the USA, both of them felt drawn to the African IVEP colleagues whom they met.

Because of their successful year abroad, their faith commitment, their admiration for missionaries who had founded their respective congregations in Colombia, and because of their affinity to African colleagues from the IVEP program, they both sensed a call to be missionaries to Africa.

Little did they know how many obstacles they would face in making their dream come true. First off, the Mennonite Church in Colombia had few resources to launch such an expensive endeavor, so other sources of assistance had to be found. When Mennonite Mission Network (MMN) Latin American director came to visit Colombia, Diana and Felipe met with her to share their dream, and to see if MMN could help. She told them that traditionally MMN only helped Latino missionaries to go to other Latin American countries. That was not what they wanted to hear. Their dream was Africa.

Secondly, the process of sending mission workers from the USA involves a missionary support team and a number of other requirements that Diana and Felipe could not meet from Colombia. Special arrangements had to be made to consider their candidacy. Who would sponsor them? Who would support them?

Before she left as a bit of an afterthought, Linda took their picture. She promised that she would tell Steve Wiebe-Johnson, MMN’s Africa director, about their interest. Months went by with no word from MMN. They figured Linda probably hadn’t even told Steve about them. Diana and Felipe felt like their dream was going down in flames. Diana buckled down on her university studies and Felipe got a job as the first paid youth pastor in their church.

Just as they began making alternative plans for their future, word came from Steve that MMN had an assignment for them in Benin, West Africa. A Mennonite Church in Burgos, Spain, had begun a school project in Benin called “La Casa Grande.” They appealed to MMN for mission workers with skills in teaching and agriculture. These were exactly the skill sets that Diana and Felipe had.

Everyone involved in the process recognized the phenomenal work of the Spirit to bring all of these elements together. A Spanish-speaking congregation in Spain inviting a Spanish-speaking couple from Colombia to be missionaries in a French-speaking African country with the aid of a mission agency in North America. Each partner contributed to the funding of this endeavor. Pesos from Colombia combined with Euros from Spain, Dollars from the USA and to CFA Francs in Benin to make God’s work possible. To make Diana and Felipe’s dream come true. Oh, and the picture that Linda originally took in Colombia as an afterthought, became the picture on their prayer card.

Diana and Felipe are doing a tour of the USA after which they will visit the sponsoring church in Burgos, Spain, then on to Benin to begin their three-year assignment. Their faces glow with excitement and gratitude for their improbable dream coming true. A Dioscidencia.

I am recounting the story they shared with us and other friends here in Harrisonburg, VA. I apologize in advance if I misrepresented any of the parts of their story. If you want to contribute to this remarkable ministry you can do so by sending a check to Mennonite Mission Network, PO Box 370, Elkhart, IN 46515, Benin ministry or connect online at www.MennoniteMission.net/Donate