Things I learned on my recent cross-cultural sojourn

I always challenge the students who accompany me on their cross-cultural program to be alert to how much they learn/change during their stay abroad. I contend that by living abroad, we feel more dependent on others, more vulnerable because of the risky nature of such a study, and more open to hearing the voice of God. The result of all this is learning about self, others and God, is far beyond what would happen if we stayed in the comfort of our own home.

1.     I can be without a car for a significant amount of time. I did not get behind the wheel of a vehicle for six weeks. Mostly I walked where I wanted to go or took public bus. If I were in a city that had decent public transportation, I am certain I would use it more to get around. I can’t say that I missed having a car at my beck and call 24/7. I learned to negotiate where I was going by other means.
2.     Walking takes time but it is worth it. I averaged over 12,000 steps per day according to my pedometer. I never walked under 10,000, and one day I walked 20,000. That’s averaging 6 miles per day with a high of 10 miles. Granted, most of the places that I wanted to visit, or where I had business to attend to were located relatively near to where I was staying. When we had to go farther away, we negotiated the bus system or took a cab. We only resorted to a cab four times in six weeks. I did not walk at a rapid pace so I’m sure I didn’t get a lot of aerobic benefit, but I still lost weight.
3.     Following the Mexican pattern of eating seems to be healthier. We ate a normal breakfast, then had a Mexican buffet at 1:00 pm. We helped ourselves to a large meal every day from the buffet, then had little to eat thereafter. Some evenings we didn’t anything; other days we at a light snack. We seldom felt hungry after eating the big meal shortly after noon. The typical Mexican pattern is to eat their main meal between 2 and 3pm and eat a very light supper. Eating like this coupled with walking everywhere we went helped me to lose over 10 lbs.
4.     I can live without a cell phone. I knew this before I left, but the trip helped reinforce the idea. I was dependent on land lines and email for the whole six weeks. I really have difficult understanding people on a cell phone, and when it isn’t in my native language it is even more difficult.
5.     I never thought I would resort to texting to communicate with my students, but many no longer read or answer emails. I couldn’t understand why I would get texts from students asking me to check my email because I normally had already read the email by the time I got the text. Then I realized that this is the way to alert someone to something important in their inbox that would otherwise be ignored. I don’t like texting because it reveals my cell phone number, and I do NOT want to be available 24/7 with a phone I can’t understand. However, most students would text before they would call. It’s those people my age . . . 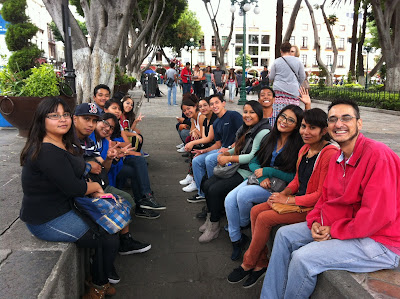 6.     A city of 2.5 million people can still have a small town feel. We spent our weekends in the Central Square of the town called the “Zócalo.” People were there to see and be seen. Many were there with their families. We were approached by numerous people who wanted to strike up a conversation with us. They wanted to know where we were from and to practice their English or German. Many were surprised that we spoke Spanish and wanted to know where we had learned it.

These things I learned do not fit the objectives I had for my students during their stay in Mexico. Nevertheless, being out of our normal context can allow us to learn something on many levels. Not to fear. My students learned all the traditional cross-cultural objectives.
Posted by DonRClymer at 7:57 PM 1 comment:

When my wife and I were being interviewed for a position with Mennonite Central Committee (MCC) many years ago, I jokingly remarked that “I would go anywhere in the world so long as they had peanut butter and baseball available.” They sent us to Mexico. 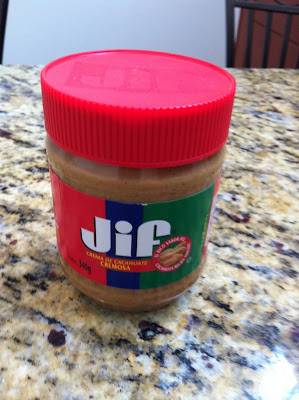 Indeed, Mexico had both available, although peanut butter was a little more difficult to manage than baseball. We had to travel nearly 80 miles to Guadalajara where the larger supermarkets carried it; it was unavailable in our “smaller” town of 250,000. Between trips to the Gigante supermarket, we pureed readily available peanuts in our blender. Don’t remember how many blender motors we blew out in the process.

Of course, with the advent of the Internet, I would no longer need to request baseball being available. I remember watching the first spring training game of my favorite team on my iPod from Guatemala one year, then the first regular season game from Mexico the same year. But this post is not about baseball.

Peanut butter is unquestionably a main staple of the US American diet. However, not everyone in the world has the taste for it like we do. I remember finding a teeny jar of peanut butter in a grocery store in Switzerland and forcing some on my Swiss mother-in-law, hoping that she would like one of my most beloved foods. She smacked her tongue trying to unglue it from the roof of her mouth while being a good sport and trying what I had described as so tasty. She managed a polite, “Yes, it’s pretty good,” in her Swiss German dialect, but never asked for any more when I delightfully placed it on the breakfast table in the future.

In some ways I was glad she didn’t especially care for it. That left me with more to savor on her delightful homemade Swiss farmer’s bread. Combined with their special forest honey, I could think of few better ways to enjoy a breakfast in Switzerland—or anywhere else in the world.

So that brings me to the present. I am leading a group of 24 students in Mexico.
Recently we were visiting a Mennonite church in Mexico City, and they were to provide us with a packed lunch to eat while we spent the afternoon and evening in downtown Mexico City. They wanted to give us their best, so they offered to make us the famous Mexican sandwich called a “torta.” They make them with ham and cheese, with leftover “chicken and mole,” scrambled eggs, or anything else you can imagine except peanut butter. They doctor them up with hot peppers, slices of avocado, tomatoes, lettuce and whatever else is available.

When they told me this, I thought of my students. Some didn’t eat meat, some didn’t eat dairy products, some didn’t like avocado, and the list went on and on. To satisfy 24 different tastes and dietary needs was nearly an impossibility. So I suggested that they make peanut butter and jelly sandwiches. We took orders. Every student ordered one or two. The only variation on the theme was one student who only wanted peanut butter, and another who only wanted the jelly.

Beyond the various tastes in food our student group was quite diverse. We had various ethnic groups along, kids from very rural areas as well as others from large metropolitan areas. There were various faith groups and some with no faith at all. But the peanut butter and jelly sandwiches united us. Is there any kid (or adult) in the United States who doesn’t eat a peanut butter and jelly sandwich?

I have traveled the world. I have acquired tastes for many different exotic and traditional foods from many different countries. But I have never lost my taste for a peanut butter and jelly sandwich. It still remains one of my favorite ways to satisfy my hunger when there is little time to prepare something more substantial.

As a student of intercultural relationships, I often say: “There is no perfect culture. All cultures both reflect and distort the image of God.” As such, I try to take the best values from each culture and try to include them in my own life, and try to downplay the less than perfect values from each culture. This integration of various cultural values helps to make us more whole.

I use peanut butter as part of a symbol of my cultural integration. The majority of my experience overseas has been in Mexico and Switzerland. So I take wonderful Swiss bread, spread a layer of US American peanut butter on it, then top it off with a layer of Mexican cajeta ( http://en.wikipedia.org/wiki/Cajeta ). The combination is a world-class taste that helps to keep in check my ego- and ethnocentrism.

What is your favorite use of peanut butter?
Posted by DonRClymer at 5:19 PM No comments: