The God of Surprises

Several years ago, while leading a group of EMU students on a Cross-cultural program to Guatemala, I was walking along the street when I met a young woman carrying a baby in her arms. She looked worried. By her dress, I judged her to be quite poor. Since my pace was a bit faster than hers, I soon passed her. I had gone no more than 10 steps past her when I discovered a wad of bills lying on the sidewalk. I bent over and picked up the bills without counting them. There was no one around, either on the sidewalk or in the nearby houses. Without thinking about it much, I turned around and handed the bills to the poor young woman behind me. “Who knows where they came from,” I said flippantly. Her face brightened up with joy, and she responded to me with a beautiful smile that completely covered her face. Without hesitating for an instant and without the slightest doubt in her mind she responded, “from God.” The poor young mother had received a surprise from God. Not only had she received a surprise from God, but she had to be astute enough to recognize that the surprise she had received was from God. 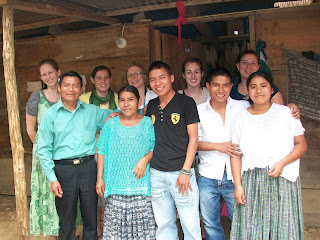 Well, this God that became flesh and moved into our neighborhood, is a God of surprises. A God who does the unexpected, the unforeseen. Unfortunately, because he is a God of surprises, many people do not recognize what he has done! They might call it a coincidence, or a chance happening. But for those who have eyes to see and ears to hear the mysteries of the Kingdom of God, the presence of God in these surprises will be recognized and affirmed.

Jesus’ birth narrative in Luke chapter 2 contains quite a few surprises. First the shepherds encounter with the baby, and then two more obscure stories of when Jesus is presented in the temple by his parents and how Simeon and Anna responded to their encounter with the Word made flesh. All of these characters have extraordinary powers of vision and hearing. In spite of being marginal people in their society, the shepherds had eyes to see the surprises that God had in store for the people of Israel. Simeon and Anna, in spite of being old, also had eyes to see God’s surprises.

The birth narrative in in Luke is what we mostly think of when we think of Christmas. This story of the shepherds in Luke and the story about the wise men in Matthew are so well known and sentimentalized that we miss the surprises that are contained in them. We also ignore other portions of the birth narrative that surround the story that we know. We are blind to the “upside down” way God works among us. We have closed our eyes and covered our ears to the radical and surprising message that these scriptures contain.

Let’s start with the shepherds. They are not exactly princes. One would suppose that the Master of the Universe, the God Almighty, the King of Kings and Lord of Lords, would be accompanied by an escort of kings and princes and other high officials of the royal courts of the earth awaiting the announcement of the arrival of a new king, the son of the almighty God. One would also suppose that there would be thousands of soldiers mounted on the finest of horses waiting for the announcement of the arrival of the son of the King of Kings.

But it was nothing like that at all. The shepherds, probably the most despicable of all human beings of that time, were the ones who received the announcement of the birth of the King of the Heavens. The shepherds were rough and crude men of the country side. They were compared to slaves. They didn’t have any civil rights. They worked hard leading the sheep and goats hither and yon to find places to eat and drink. At night they had to be alert to protect their flocks not only from wild animals but also from thieves.

When these humble and uneducated men received the message from an angel, they responded immediately. We are all familiar with the story of how they went and found Mary and Joseph and the baby in the manger. After finding the God-child, they imitated the heavenly host of angels glorifying and praising God because all had taken place as they had told them.

But, what are the surprises that we find in the story of the shepherds? As already mentioned, the announcement of the birth of the son of God was given to despised and course men. It was not given to the customary officials in the majority of societies; neither to princes, kings or soldiers. Where were the roman officials? Nor was the message given to the people with the best religious education. Where were the rabbis, the Pharisees, the men who knew the law and those with the best possible education? Nor was the message given to the wealthy. Where were the Chief Priests, the Sadducees, the large land owners and other wealthy people of the time? They were completely absent.

I am convinced that the announcement was available to anyone who had eyes to see and ears to hear it. But only the shepherds had their hearts ready to receive it. That’s the way it is. The humble and the meek will inherit the Kingdom of God because they are neither blind or deaf. What a surprise! God reveals the most important message of all time to a group of vagabond shepherds because they were ready to receive it.

After Jesus was several days old his parents took him to the temple in Jerusalem to fulfill some ritual laws of the Jews. At the temple we find an old man named Simeon who was waiting to die. He was probably suffering from some debilitating disease, or perhaps he was so advanced in age that he was fed up with life and he wanted to die. But he had received a promise long ago from the Holy Spirit that he wouldn’t die until he met the Messiah. From what we read of him in the scripture, there is little doubt that this old man was very devout.

Immediately upon seeing the young Jesus, he recognized him to be the Messiah, the promised one of God for the salvation of the people of Israel and all the nations of the world. Right there he took the baby Jesus in his arms and blessed him and said, “my eyes have seen your salvation which you have prepared in the sight of all nations: a light for revelation to the Gentiles, and the glory of your people Israel.” After blessing both Mary and Joseph as well, he said some surprising things. “This child is destined to cause the falling and rising of many in Israel, and to be a sign that will be spoken against, so that the thoughts of many hearts will be revealed. And a sword will pierce your own soul too.” What he was saying, is that the message Jesus would bring would be so surprising that it would cause divisions, arguments and fights. Doesn’t sound like the kind of glory or revelation we normally think of.

I am convinced that the ability to recognize the Messiah was available to anyone who had eyes to see and ears to hear. But only a pious old man had a heart ready to understand the message. The humble and the meek will inherit the Kingdom of God because they are neither blind nor deaf. What a surprise! God reveals the most important message of all times to an old man ready to finish his walk on earth.

At the same time in the temple there was an old woman named Anna. She had served God for many years with fasting and prayer. She was an 84-year old widow who was also a prophetess. Somehow or other, when I think of her, I think that she must have been like the many beggars I have seen over the years surrounding the huge churches in the cities of Latin America. Dressed in old rags, very poor, but with a certain dignity because of her pious activities. But I also imagine that the people who passed her by ignored her, or avoided looking at her directly, either because she was very poor, or because they thought she was crazy uttering her prophesies. How often have we passed by a homeless person, or someone ranting, denying their personhood by ignoring them or avoiding them?

I am sure that the ability to recognize the Messiah was available to anyone who had eyes to see and ears to hear. But only an old widow had a heart ready to understand the message. The humble and the meek will inherit the Kingdom of God because they are neither blind nor deaf. What a surprise! God reveals the most important message of all times to a poor old widow whom many considered crazy because of her prophesizing.

So, what do some crusty shepherds, a dying old man and a crazy old prophetess have to do with us today? Perhaps like many of the characters who passed through the three stories from Luke 2 that I shared, your own eyes have become blind and your own ears have become deaf to the recognizing the Messiah as a person or receive his message. What are you doing to prepare your hearts so that you will have eyes to see and ears to hear when Christ comes? Are you ready to see the unexpected, the surprising message that the Master of the Universe has for you? Are you ready to acknowledge the presence of God every minute of the day, every day of the week? When something unexpected happens, even something so simple as finding a wad of bills on the sidewalk, are you ready to proclaim God’s providence to the world? To the people who missed the Messiah in these stories, Jesus later said “Though seeing, they do not see; though hearing, they do not hear or understand. In them is fulfilled the prophecy of Isaiah: “‘You will be ever hearing but never understanding; you will be ever seeing but never perceiving. For this people’s heart has become calloused; they hardly hear with their ears, and they have closed their eyes. Otherwise they might see with their eyes, hear with their ears, understand with their hearts and turn, and I would heal them. But blessed are your eyes because they see, and your ears because they hear.”

Posted by DonRClymer at 12:57 PM No comments: