Give Us This Day Our Daily Tortilla . . .

I was nineteen when I ate my first tortilla. It was in Honduras where I had just begun a two-year term of voluntary service. This was before the day that you could find a Mexican restaurant on nearly every street corner. At least it seems that way in the town where I currently live.

The tortillas in Honduras are a bit different from the Mexican ones. They are made of the same corn “masa,” but are nearly a quarter-inch thick. I wasn’t too impressed with my first bite. They seemed rather flavorless. Several of my expatriate friends tried to make them palatable to our sensibilities by sprinkling salt on them. That was an anathema to our Honduran friends as it would be to today’s diet conscious folk—for different reasons. 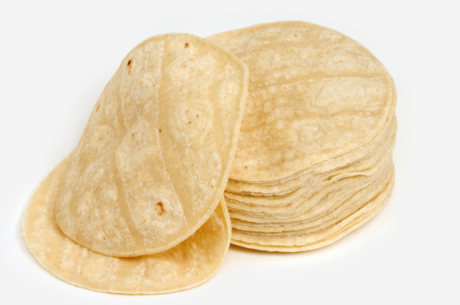 Corn has been the staple of the diet of Mesoamerican peoples thousands of years before the arrival of Europeans. It was a sacred food, and to this day the descendants of the great indigenous cultures that stretched from Honduras through Guatemala, all of Mexico and into Southwestern United States, have ceremonies to celebrate its planting and harvesting.

In the village in rural Mexico where my wife and I worked for Mennonite Central Committee, having a storeroom full of corn was more important than money in the bank. Inflation was running rampant and savings continually lost their value. To save up for a rainy day was to put more corn in your storeroom. At least you would have something to eat.

Making tortillas is an intricate process. It starts by husking and shelling dried corn from your storeroom and soaking the kernels overnight in a bucket with a water and lye solution. The kernels swell up and become soft. Early in the morning the women carry one or two buckets to the local corn grinder and have the soaked kernels ground into a mushy paste called masa. This paste is than hand patted into a flat cake that is grilled over an open fire for the best taste. Many women use a “metate” to take what comes from the mill to make their masa just the right consistency to make the proper tortilla.

Of course, in the cities of Mexico, there isn’t enough time to go through the whole process, so you can buy tortilla “flour,” add water, and make your own tortillas more quickly. “Tortillerías,” or tortilla factories have cropped up in many places as well where tortillas are mass produced. True aficionados of tortillas look down on both of these modern ways of making tortillas. The taste just isn’t the same.

In the last decade before the turn of the twentieth century, the government of Mexico wanted to make Mexico into a modern, European-like country. They tried to promote the consumption of bread over and against the tortilla. The tortilla was considered backwards. Indeed the French under Napoleon’s protégée Maximilian, had ruled Mexico for a period in the mid nineteenth century. Bakeries had sprung up all over Mexico with lots of delicious breads and sweet breads.

Try as they may to make bread trump the tortilla, the government failed to convince the people to abandon their beloved tortillas. They were part of the collective soul of the people. It’s like trying to have modern medicine take over traditional ways of healing in Mexico. All levels of society continue to consult “curanderos” for their physical and emotional ailments. But that’s another story.

A typical Mexican family consumes nearly 2.5 pounds of tortillas a day. In rural areas the amount increases. For those living on fewer than $5.00 per day, tortillas account for nearly half of their daily calorie intake. The importance of the tortilla cannot be underestimated. Along with accompanying every meal like bread for many western countries, they appear in numerous traditional foods like enchiladas, tacos and tostadas. In rural areas they are also used as utensils in the absence of tableware.

Because of the importance of the tortilla in Mexico, Guatemala and Honduras, I tell my students that the Lord’s prayer in those countries should be, “give us this day our daily tortilla.” It would make a lot more sense in their context.

I learned to love the taste of tortillas. The thin ones from Mexico, the fatter ones from Honduras to the special blue ones from rural Guatemala—they all make my mouth water when I smell them cooking on the grill. Hearing the pat-pat-pat of woman forming them early in the morning in nearly every village of Mesoamerica makes me grateful for God’s provision for my brothers and sisters in these lands.


Give us this day our daily tortilla!
Posted by DonRClymer at 4:25 PM